We mentioned image maps briefly in Section 2 of this course when we were talking about adding alternative text to images. In this section of the Web Accessibility Course we will in more detail into how Image maps work, and how to make them accessible.

An image map is a picture on a Web page that provides different links to other Web pages, depending on where a user clicks on the image. Image maps are often "real " maps such as the example in the screenshot below from the Dell support site (http://support.dell.com).

More often, image maps are pictures of navigation items such as this example from the Sun Microsystems Web site (http://www.sun.com/):

Part of the image map at www.sun.com

Here is another interesting image map which is on the home page of the web site of the Target stores, http://target.com. This image (now with correct alt-text, "In the Spotlight") contains 33 clickable areas, corresponding to the text in the smallest font, like "30-Minute-Meal Recipes."

Screen shot of one image map on Target.com

The image map is called client-side because the browser (the client) must figure out how to handle the result of a click on the image. Any time there is a click on the page, the client (browser) figures out whether or not the coordinates of that click fell inside one of the regions specified as an <area> of the client-side map. If the click is inside one of those regions, then the browser opens the corresponding URL—that is, the value of the href for that <area>.

The following is a client-side image map from an earlier version of the U.S. Senate web site (http://www.senate.gov/). The alt-text on the image that creates the map is alt="Quick List" and there are three hot spots.

Here is the code that makes the image in Figure 7-20 as a client-side image map:

The four image map areas have alt-text that is exactly the same as the text in the image; this is perfect. The way that this client-side image map works is that each <area> specifies a region of the image in which a click will open a certain URL, namely the href of the <area>.

The shape and coord (coordinates) attributes define the region of each <area>. There are three possible shapes: rect for rectangle, circle, and poly for polygon. The coordinates are pixel coordinates measured from the top left of the image. For a rectangle, the developer must specify the top-left and bottom-right corners. A circle is given by the center point and radius. A polygon is specified by a series of points corresponding to the corners of the polygon.

As another sample, the Target.com image above has a map intuitively named "69109921". Here are the first three of the 33 areas of the that map.

Before the Target Corporation was sued by the National Federation of the Blind (https://jimthatcher.com/law-target.htm) these image map areas did not have alt-text. In fact there were over a hundred hotspots on about a dozen image maps and none of the areas had alt-text. Screen readers try to find information to convey to a blind user when active images (including areas) lack alt-text. In the case of image maps, that will be the href of the area. So instead of listening to "Link 30 Minute Recipes link Grocery Coupons and Specials, link Supper Target" when the alt-text has been added, a blind visitor instead would hear "Link default.aspx?ref=sc_iw_r_12_0 link /site/en/supertarget/page.jsp?title= supertarget_coupons_specials_main&ref=sc_iw_r_12_0 link /site/en/supertarget/page.jsp?title= supertarget_home&ref=sc_iw_r_12_0."

In both the examples in this section the alt-text on the image itself was chosen to be text in the image which acts as a heading, alt="In the spotlight" for the target sample, and alt="Quick List" for the US Senate image map. These images themselves are not active, so the alt-text (from the second section of this is course) should convey the information in the image. These two examples are good illustrations of that idea.

Often for image maps, there is no information conveyed beyond the links, as illustrated by the fragment from Sun Microsystems image map above. For these, user alt="".

The following shows another image map, from www.metrokc.gov/services.htm. It is fundamentally different from the previous examples though not in appearance.

The image above was coded as a server-side image map on the King County web site. Here is the elided code.

What makes this a server-side image map is that there is no usemap attribute; instead, the image itself is enclosed in an anchor tag (<a>) and the img element has the boolean ismap attribute. That attribute tells the browser to send the coordinates of the user mouse click directly to an associated map file on the server that is referenced by the href attribute of the anchor element. Without looking at the source code it is possible to detect a server-side map because mouse coordinates are displayed in the status area of the browser as you move the mouse over the image.

For any person who cannot use the mouse, this is a fundamentally inaccessible form of navigation because it requires positioning the mouse on some part of a picture indicating a desired action (pressing Enter on a server-side image map sends click coordinates 0,0 to the server).

The U.S. Access Board recognized the problem with server-side maps and recommends having redundant text links if you do use a server-side map, in this Section 508 provision:

§1194.22(e) Redundant text links shall be provided for each active region of a server-side image map.

WCAG 1.0 has the same requirement at Priority 1:

1.2 Provide redundant text links for each active region of a server-side image map.

Indeed, the King County site in Figure 7-21 has redundant text links at the bottom of the homepage, and the alt-text for the image itself which is server-side map tells the user to find text navigation at bottom . That's good!

I can't see any reason why the King County site would use a server-side map for its main navigation. The equivalent text links at the bottom of the page make it accessible and compliant. The King County site, however, does not satisfy the second provision of the Section 508 rule on web accessibility:

The Section 508 provision is again almost identical to Checkpoint 9.1 of the WCAG:

By either of these requirements, if you can't define a region with the existing geometric shapes, then a server-side map is OK - so long as redundant text links are provided. But all regions can be defined with a polygon or finite set of polygons, so server side maps are not allowed.

The new version of the Web Content Accessibility Guidelines (WCAG 2.0) doesn't even mention image maps, but gets to the heart of the matter - the fact that server side maps can't be used without a mouse.

Guideline 2.1 Make all functionality operable via a keyboard interface.

SC 2.1.1 All functionality of the content is operable through a keyboard interface without requiring specific timings for individual keystrokes, except where the underlying function requires input that depends on the path of the user's movement and not just the endpoints. (Level A)

If you have a server side map and a set of links that provide the same function, then that would satisfy 2.1.1, the functionality is operable through the keyboard interface, even if one particular object is not.

There is nothing about the regions in the King County image map that would make them difficult to define with available geometric shapes; simple rectangles would work just fine. In fact, the main navigation map on the homepage has been changed to a client-side image map, shown below.

As mentioned earlier, client-side maps provide three shapes to describe regions: rectangles (shape="rect"), circles (shape="circle"), and polygons (shape="poly"). Effectively, any shape can be described with a polygon or collection of polygons.

The following image is a good example of a client-side image map with rather complex hotspots, which are regions defined by polygons. It is was Microsoft's Local District Information Map but it is not on the site that I could find. 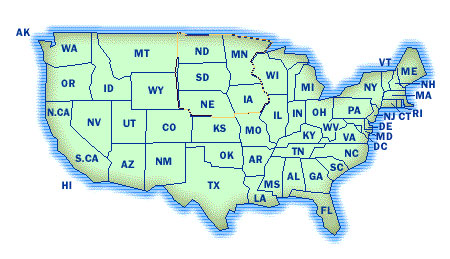 A complex client-side map - a stylized map of the USA, divided into regions

Using the Tab key, I moved the focus indicator in Internet Explorer to the upper Midwest area in the map above so that the focus polygon is visible. The source code for that area in the map uses a polygon determined by about 45 points:

Even though it is hard to imagine, there may be cases where a designer wants every pixel to be a hotspot with different actions. You might argue that there are too many regions in this case. But that is a different issue than the one raised by provision §1194.22(f) and Checkpoint 9.1. A client-side image map still could be used.

This course was originally written for the Information Technology Technical Assistance and Training Center, funded in support of Section 508 by NIDRR and GSA at Georgia Institute of Technology, Center for Rehabilitation Technology. It has been completely revised.

Sections in this tutorial